When Megan Morgan received an email telling her she had won an ATV trailer full of Rumenco MAXX low moisture licks she thought it was a fake – 21-year-old Megan had entered the competition via a social media link in autumn 2017 so when the winner was drawn on 31st January 2018 she barely recalled entering!

Luckily, Megan didn’t delete the email and she took delivery of the brand-new trailer, and a mixture of MAXX Energy and MAXX Cattle Booster low moisture, controlled intake licks just as lambing and calving kicked off on the family farm in west Wales. 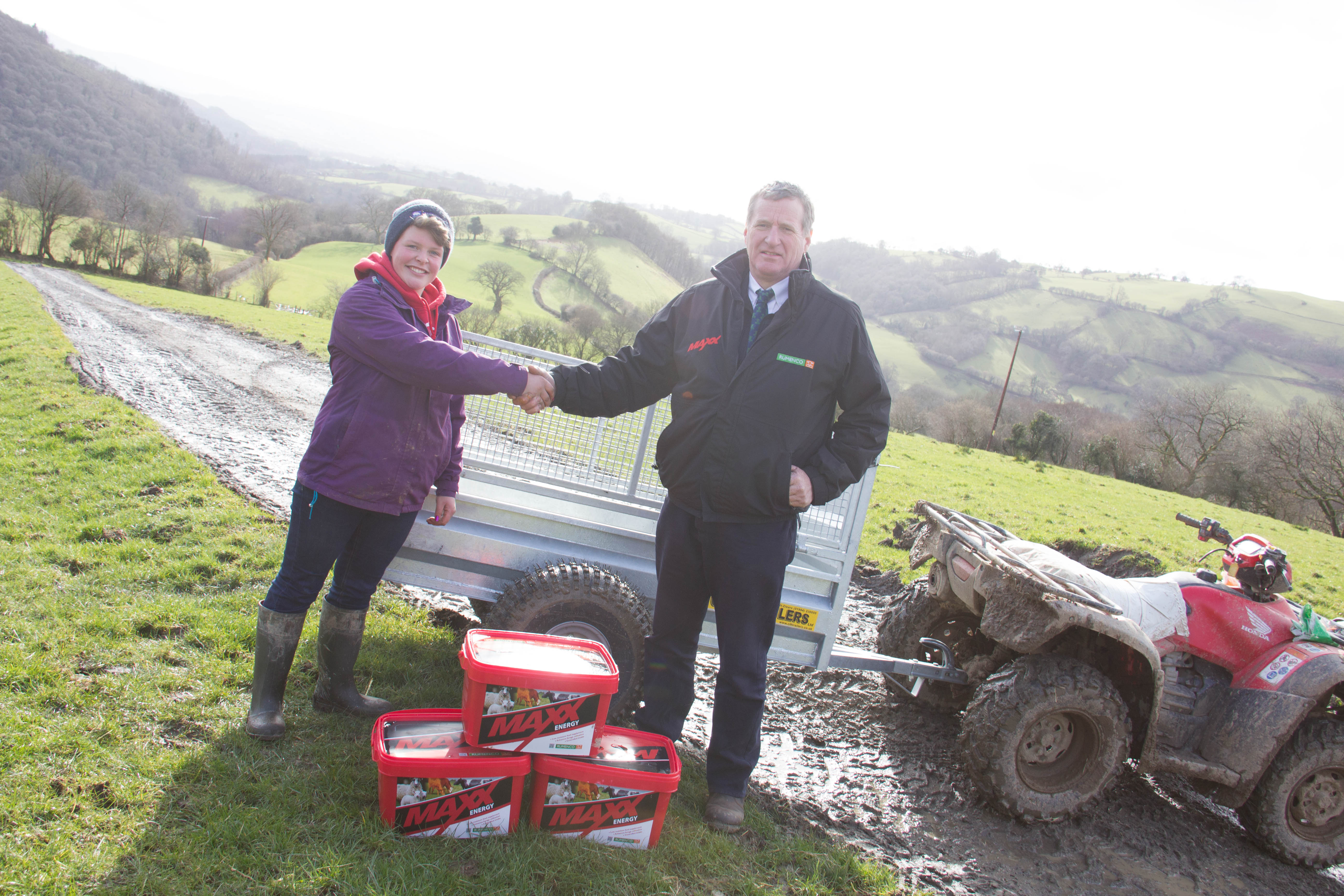 Megan, along with her parents John and Alison, with timely help from sister Emma (who is also an accountant), run the 630-acre upland family farm carrying a herd of Limousin cross and British Blue cross sucklers as well as their flock of welsh mule ewes.

Being an upland farm, the Morgan’s away winter a number of animals in order to have grass in front of ewes and lambs as they start lambing from mid-February.  Traditionally, they have used Rumenco’s Rumevite feed blocks as an easy, labour-saving way of feeding these animals as well as those on the home farm as they look to manage grazing through the winter months, and as Megan explains, the timing of the prize was ideal.

“We tried Rumenco’s MAXX buckets for the first time this winter with some of the ewes to see how they lasted and how the ewes did on them, and we have been really impressed.”  Megan continues, “Stock look well on the MAXX buckets we have tried and we really like the way they last compared to traditional buckets as they have much steadier intakes.  Winning these buckets means we will continue using them for the ewes whilst we chose MAXX Cattle Booster so that we can also see how the cows do on them too.”

Winning an ATV trailer (full of feed buckets) just in time for lambing would typically be a huge bonus for most farmers – the ability to move ewes and lambs out to the field more easily as well as being able to take feed out in a safer, more convenient manner – but the Morgan’s actually bought a second trailer pre-lambing in 2017 so the latest one can become a spare!

“We found having only one trailer for the quad meant at the height of lambing we could hardly keep up so we got ourselves another trailer last year and it’s made a huge difference.  As we lamb indoors, having a second trailer has enabled us to get ewes and lambs out to pasture quickly and easily now two of us can be doing it at the same time if needed” says Megan.  “Although we didn’t need another trailer right now, I’m sure it won’t go to waste!”

Laura Drury, Rumenco Technical Adviser explains “As previous users of Rumenco products, the Morgan family have already seen the benefits block and bucket feeding systems can bring in terms of being a labour saving, convenient and accurate way to feed stock without reducing forage intakes.  Hopefully they continue to see the benefits of the new low moisture, controlled intake buckets they started using this winter and the prize allows them to see further benefits for their herd and flock and at calving and lambing time this spring.”