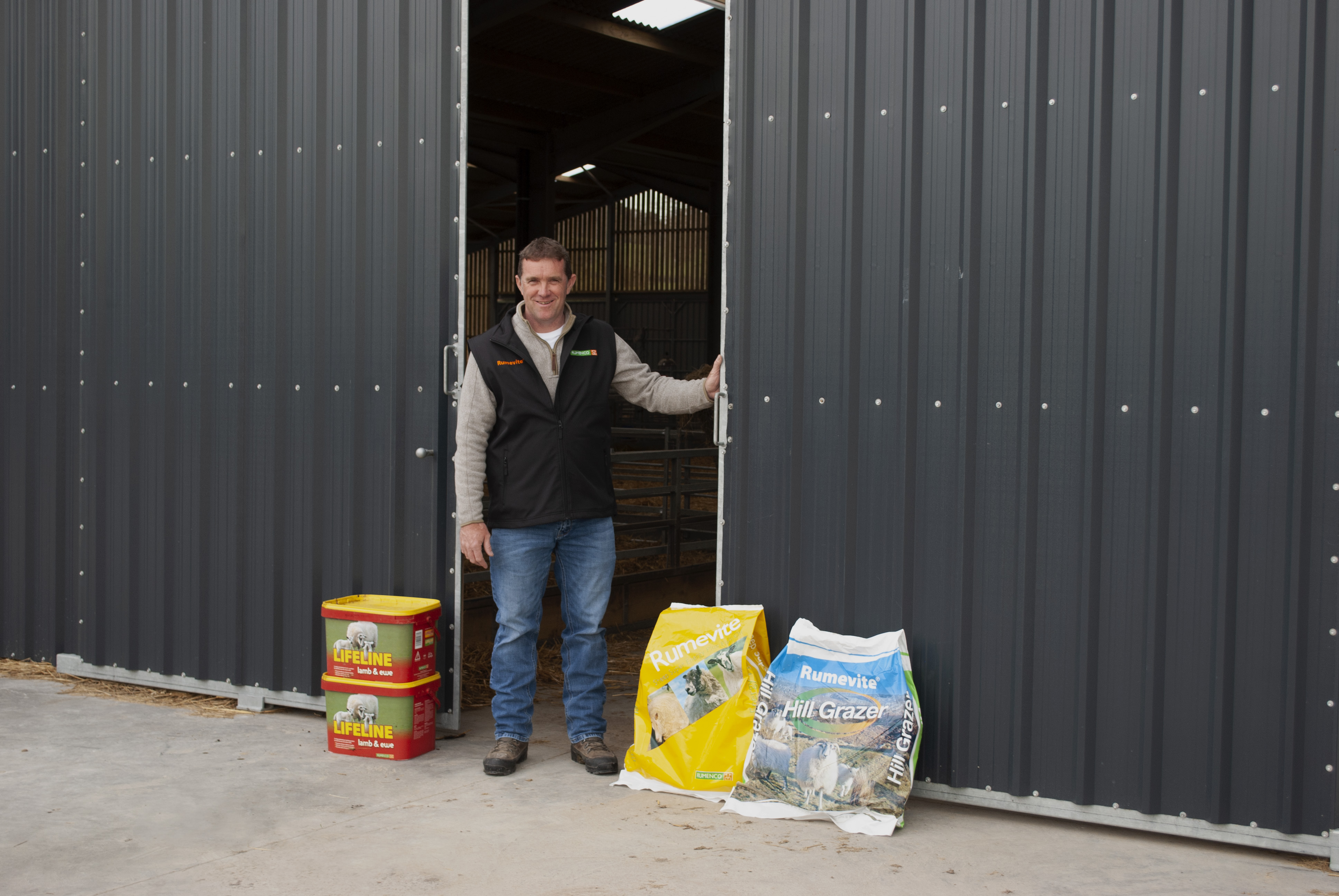 The ewes benefit from nutrition provided by Rumevite Sheep Super Energy and Fish Oil which is introduced 2 weeks prior to tupping and continued for a duration of 8 weeks.  Rumevite Sheep Super Energy has been proven to increase lambing percentages by up to 22%* and contains fish oil as a good source of omega 3 fatty acids along with protected zinc. When used alongside the provision of good grazing for the ewes this helps to provide maximum gains and optimum fertility, the lambs have also been weaned early into the sheds.

The fertility and lambing rates at Thain Stormer Hall speak for the success of the system, with a low barren rate of only 1.29% and flock section lambing rates ranging from 161% up to 198%.  Investment in the farm, with the new 1640 Sq m lambing shed has provided a bespoke and purpose-built environment for lambing and flock management.

Roy has previously fed Rumevite products and moved to his current system 2 years ago, stating that “the trusted Rumevite and Lifeline products certainly show benefits with ease of lambing and productivity of the flock and with good palatability you know the ewes are getting all the nutrition they require”

“The technical support and back up offered by the Rumenco team is a valuable resource in managing the flock at Thain Stormer Hall.” States Roy 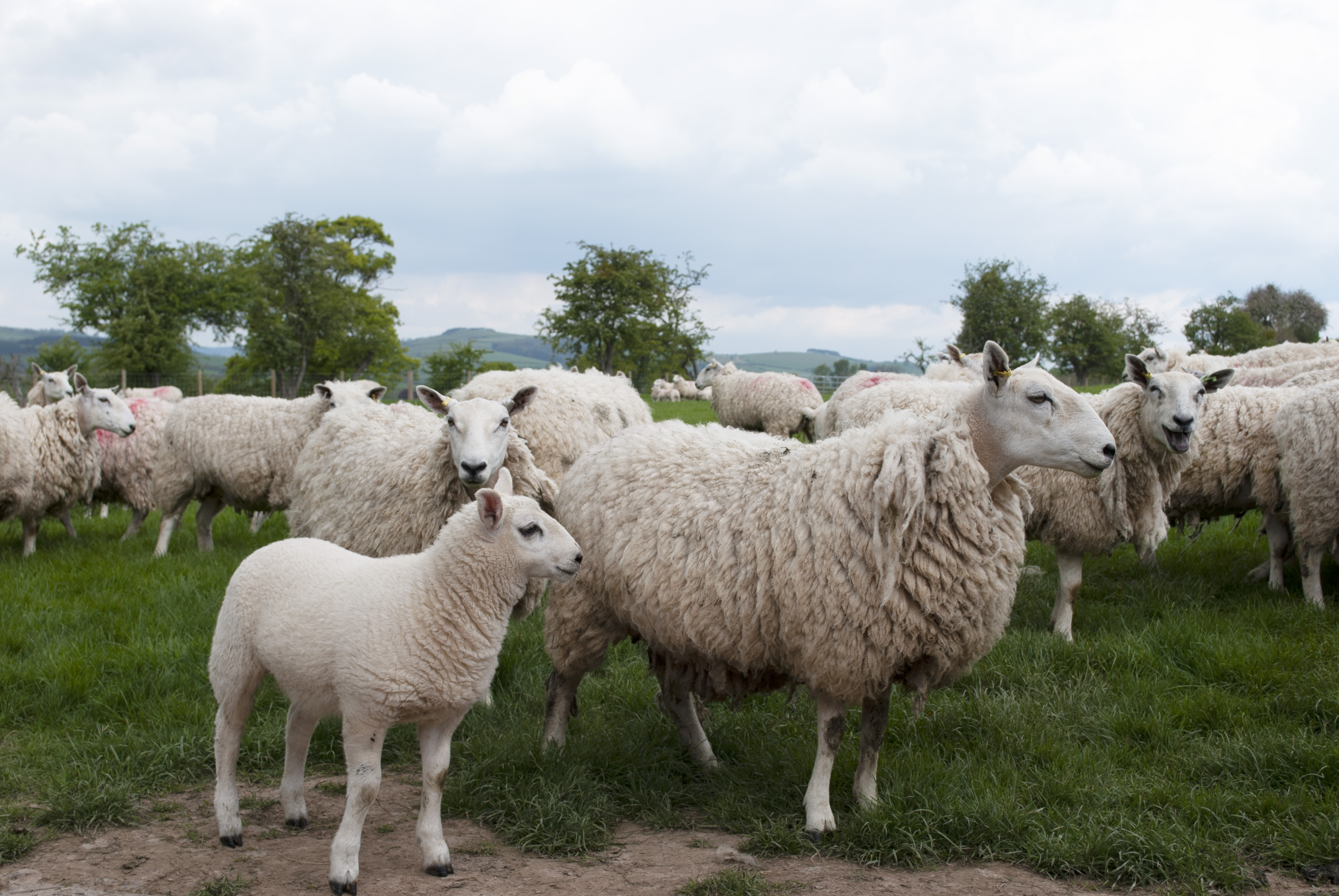 *Independent trial compared to no supplementation

Jac feels that having Rumevite Graze DUP out all the time helps prevent mis-mothering.

Jac Hughes, with help from Siwan, shepherds approximately 800 ewes in the beautiful grounds of Chirk Castle.

Jac lambs outside and last year decided to try Rumevite® Graze DUP for ewes post-lambing. Despite the difficult lambing season in 2018, Jac felt the blocks benefited the ewes and helped prevent mis-mothering.

This year, Jac fed his ewes a compound feedcontaining quality protein up to lambing, atwhich point he turned ewes on to restedpasture along with Rumevite® Graze DUP.

As with last year, Jac feels that having theblock out all the time helps preventmis-mothering.

"Ewes are much calmer knowing they have supplementary feed at all times."

Furthermore, the high levels of Digestible Undegradable Protein (DUP) in Rumevite® Graze DUP, has helped ensure ewes haveplenty of milk for their lambs with uddersalways full.

We used Hill Grazer for our ewes before and after lambing as a complement to winter forage. The free-access nature of the product meant crowding at feeding was avoided so older ewes, heavy in-lamb ewes and ewe lambs had good access to feed 24/7. As a result, they held condition well throughout, no matter the weather or the access to grazing challenges we faced in winter!

Our interest in Rumevite Hill Grazer started by seeing it on the Rumenco website and we were lucky enough to win some product in a social media competition!

We fed Hill Grazer to our ewes both before and after lambing as a complement to winter forage. The free-access nature of the product was hugely beneficial as it avoids the feed rush scrum seen with traditional trough feeding and yet the ewes didn’t just gorge on it either! This was especially good for our older and very heavy in-lamb ewes and ewe lambs as they had good access to feed in their own time.

Using Hill Grazer meant our ewes kept their condition well throughout a very harsh winter and tough spring and it was also good to know that even in hard weather the ewes had access to a quality feed block when grazing was difficult.

Rumenco’s MAXX Energy suits my farm ideally with its controlled intakes meaning it lasts longer and keeps my ewes in prime condition. I’ve certainly found that since using MAXX Energy and also LIFELINE Lamb & Ewe licks pre-lambing, there has been an increase in lambing percentage and lamb survival...

Profitable sheep production relies on maximising lamb sales, which is largely influenced by ewe nutrition from tupping time right through to weaning. For Brecon hill sheep farmers, the Morgans, nutritional licks play a vital role in helping to ensure their ewes are on top form at key times of the production cycle.

Owen Morgan and his mother Lynwen Morgan run a closed flock of 1200 pedigree Brecknock Hill Cheviot ewes and a herd of 45 Limousin cross British Blue suckler cows at Gorslwyd Farm set in the heart of the Brecon Beacons. The farm spans over 650 acres, rising from 800ft to 1350ft above sea level, with rainfall averaging around 80 inches a year - “we have a very long winter!” notes Mr Morgan.

The family pride themselves on grassland management having been runners up of the Welsh Grassland Society Award on two occasions within the last few years with their grazing comprising mainly of long term leys, with approximately 20 acres of red clover grass leys for finishing ram lambs.

Tupping begins in October and ewes are offered Rumenco MAXX Energy low moisture licks alongside available grazing from pre-tupping throughout the whole winter. Mr Morgan explains that he started using the MAXX licks in 2016 and since then he’s seen an annual increase in scanning percentage, less concentrates are used and his ewes are fitter.

Supplementation of the ewes with licks continues throughout the winter until lambing at Gorslwyd Farm, which takes place indoors within a four week period from mid-March until mid-April. Single-bearing ewes are offered MAXX Energy right through to lambing alongside ad-lib grass silage and a small amount of concentrates, whereas twins and triplets are switched onto Rumenco LIFELINE Lamb and Ewe buckets from 4 weeks pre-lambing alongside grass silage and concentrates to provide extra nutritional support.

“Rumenco’s MAXX Energy suits my farm ideally with its controlled intakes meaning it lasts longer and keeps my ewes in prime condition. I’ve certainly found that since using MAXX Energy and also LIFELINE Lamb & Ewe licks pre-lambing, there has been an increase in lambing percentage and lamb survival. Lambs are more vigorous when they are born, they are up on their feet and suckling more quickly, which means I can turn them out of the lambing shed sooner”.

Mr Morgan also notes he now uses less concentrates plus the licks are also a more convenient and simple way of supplementing his sheep whatever the time of year.

For every beef suckler farmer, a successful calving period is of critical importance and plays a key role in determining the overall profitability of a herd. Pedigree Welsh Black cattle breeder and Denbighshire Welsh Black Cattle Society (WBCS) council member, Beth Rees, has seen superb results ever since introducing LIFELINE Pre-Calver to her herd.

Mrs Rees and her husband run a closed pedigree herd of 25 Welsh Black suckler cows at Cae Mawr; a small hill farm comprising of 130 acres situated 600ft above sea level rising to 900ft. 15 years ago, the couple decided to join the Premium Cattle Health Scheme run by the Scottish Agricultural Society, and in 2001 achieved the Elite Status. “As far as I am aware, we are the longest standing Elite herd of cattle in the Premium Health Scheme” says a proud Mrs Rees.

The herd is housed in late November, in preparation for calving in early spring. At housing, the cattle are fed home grown big bale silage, and approximately 6 weeks before calving commences, the cows are offered Rumenco’s LIFELINE Pre-Calver buckets. LIFELINE Pre-Calver is a unique supplement for in-calf cows and heifers, specifically formulated to enhance colostrum quality and yield, optimise calf immunity and vigour, and support an easier calving process.

“We used to have some lethargic calves, which would mean us having to intervene to get that vital colostrum into them in the first couple of hours” explains Mrs Rees. “I first heard about LIFELINE Pre-Calver through my involvement with the WBCS journal, and thought I would give it a try”.

For every suckler farmer, an easy calving and low calf mortality are two of the most important factors at calving time, with calves vigourous and suckling fast, and having access to a plentiful supply of quality colostrum. “Since using LIFELINE Pre-Calver, the calves are lively and up on their feet straight away, and we didn’t have any lazy calves or prolonged calvings last year. Even my first calvers produced plenty of good quality colostrum” reveals Mrs Rees. “A live calf from an easy calving is the most important factor for every farmer”.

Mrs Rees advocates, “I would recommend LIFELINE Pre-Calver to any suckler herd farmers; both pedigree and commercial. The product really does do what it says on the box!”

Beth also uses Rumenco’s MAXX Energy, MAXX Cattle Mag and SUPAlyx Garlic tubs, and has found the products that she has used to date to be of excellent quality.

LIFELINE is aptly named as it really has helped us, streamlining and making lambing a less stressful time, it does the job. As soon as lambs and calves hit the ground they are trying to stand up and suck.

North-East sheep and beef producers JJ & JM Sanders have come to expect a far easier lambing and calving season and a crop of good, strong lambs and calves from a variety of breeds since taking decisive steps recently to streamline their supplementary feeding system at these key times.

John and Juliet Sanders with son Richard and daughter Lucy run a large flock of Cheviot cross Mules and Beltex crosses alongside 120 suckler cows including 80 mostly pedigree Simmental cows. Juliet is the outgoing Chairman of the North-West Simmental Club and

they are well known locally for breeding all of their own replacement stock. The cows calve all year round and are in-wintered on ad lib dry haylage plus restricted fodder beet to add energy. Lambing starts around 10th April at grass, but ewes are then housed for 24 hours to

ensure lambs are well bonded before turning back out. The sheep are also fed haylage and fodder beet plus Rumenco’s LIFELINE buckets.

Since using the LIFELINE John says he has seen an improvement in calving and lambing ease, with less interventions, extra vigour in the newborns and lots of colostrum. The Beltex have big lambs that were sometimes difficult to get out and slow to get going and likewise

with the Simmental cows. But since a neighbour gave John some empty LIFELINE buckets to use for water and he read the product benefits on the label they have not looked back. “Lambs come out greased with loads of birthing fluids and calves are more alert, heads

are up straight away and get sucking very quickly”, says John. “We tried LIFELINE with the sheep first, and because it made such a difference we then tried it on the cows”. We have had our easiest ever calvings since using Lifeline and we wouldn’t calve again without it”. John particularly remembers two heifers with big calves that he thought would present difficulties, but they calved with ease.”

“The research conducted in conjunction with SAC showed that it is possible to achieve a 25% increase in the IgG content of ewe colostrum if you substitute a standard high energy bucket with LIFELINE says Philippa Gill, the Rumenco Area Business Manager”. “The immune protein IgG is an important measure of colostrum quality that infers passive immunity to disease in young lambs and calves. As all stock people know, healthier lambs and calves have

increased feed intakes and growth rates, show improved early vigour and general health, thrive and are less likely to suffer from conditions such as coccidiosis, hypothermia and mis-mothering. Losses due to predators may also be reduced when lambs are livelier if born outside.

The Sanders family introduce LIFELINE to their ewes and cows a month or so before lambing and calving. “LIFELINE is aptly named as it really has helped us, streamlining and making lambing a less stressful time, it does the job. As soon as lambs and calves hit the ground they are trying to stand up and suck”.